“How” to write is something a lot of people like to talk about.  I don’t think I have a very satisfying answer. Maybe I haven’t done this enough yet. But here’s how I wrote the first one, and how I’m making progress on two new works.

It starts off simply.  I freakin’ love my characters.  I love them.  They’re so easy and fun for me to write, that every time I get to a scene with them chatting it’s like giving a small treat to myself.  And I think the book reflects that.  I love when they talk, they love when they talk, and the only thing that keeps them from being together always is work–both for them and me. 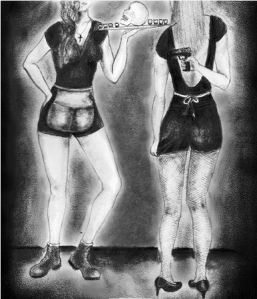 Secondly, I needed a plot. I say secondly because I would read about Harry Dresden finding out his local bodega was out of eggs when he’d promised Karen pancakes, honestly. (Actually, anyone know Jim Butcher? Can this happen?) I like Harry. He’s interesting to see in action even when he’s doing normal stuff. But for most days, we’d like to read a little more than that. So think of something that would be fun for you to write and leave room for the plot to change. I think a lot of my “writer’s block” was because I was trying to fit the narrative to an idea that wasn’t fully formed, or that sucked, on second thought.  You shouldn’t be forced to tell a crappy story just because you said so.  You didn’t buy that logic as a kid, you shouldn’t stand for it in your own world.  Sure, it’ll mean rewrites.  Ain’t no one writes a book without rewrites.  This is just a Truth, like gravity.

And then just…write!  I’ve started…four? books in my life so far, and only finished one, because I connected with this story.  I loved figuring out what came next.  I loved not knowing what came next til it happened.  Which isn’t to say I didn’t outline.  I think maybe for 76,000 words I wrote about 1,000 of outline.  It looked something like this:

Ch 1: Find job. Meet someone on the way to talk about world
Ch 2: Get settled in area of job, think something weird is going on.
Ch 3: Investigate; talk to sorority; find monster too late

It’s super sparse, as you can see. Sometimes I didn’t have enough for a full chapter from this, and it had to become part of another chapter. Sometimes these things, vague as they were, evolved into more story, and I needed to add a chapter to address it.  Like dees:

Ch 3: Investigate, go to party.
Ch 4: Realize monster was there, narrow down what it is

This gave me room to adapt and move on if my original idea belly flopped. It allowed a sense of collaboration with myself that was pleasing and kept my work interesting to me, even the 20th time I read it, which is important.  Step one to convincing other people to read your book: not wanting to die after you finish re-reading it.

So, that’s how I got a first draft.  Your mileage may vary.  My tl;dr?  Get excited, bitches. Make enough of an idea that you can riff off of it, and be prepared for copious amounts of rewriting. And have fun! If you’re having fun, your readers probably will, too.

One thought on ““Bro, Do You Even Outline?””