You can’t go around yelling CONSISTENCY at people, I’ve been informed, but I’m going to keep doing it anyway because I am nothing if not consistent.

CONSTANT VIGILANCE is also good, and if that’s what you want to yell at people when they least expect it, by all means. Live your best life. But I am easily distracted, so I am woefully unprepared to have that lifestyle. CONSISTENCY! though…that’s something I can do. Again and again.

“Why do you keep yelling at the cats when you know they’ll do it anyway?”
“CONSISTENCY!”

“Why do you turn on your computer before getting coffee?”
“CONSISTENCY!”

“Why do you read science fiction and urban fantasy?”
“CONSISTENCY!”

“What don’t you like about nuts in baked goods?”
“CONSISTENCY!”

This is all true, and while I would be delighted to discuss with you my thoughts on cat parenting, the proper way to make carrot cake, and productivity, today’s post is mostly about consistency in ostensibly realistic fiction.

C’mon, what are you, an animal? Small bites.

I am specifically referring to urban fantasy, of course, because I have no legs to stand on in science fiction (which would be a great “what if” for a science fiction story–you’re welcome, NK Jemisin or Seanan McGuire!) but I am going to point with all of my energy at sci-fi and angrily whine “but they’re doing it!” until you either agree or buy me ice cream. I’ll take either. Baked good predilections aside, I’m not picky.*

The thing about books in which our present is also their present (or past, if it’s far future sci-fi. Or future, I guess, if it’s a book about time travel) is that we don’t need to make the world over whole cloth. We can totally just take someone else’s cloth, as long as they’re not using it. We are like theatre groups who do a modern day Shakespeare retelling so that everyone can wear their own “street” clothes and we don’t need to find a seamstress who’s interested in sewing twenty yards of velvet.

Urban fantasy is the jeans of books.

We just have to ask a “what if” question and then follow that as honestly as we can.

What if there was a wizard who set up shop in Chicago?

What if someone could see how a person would die when they touched them?

What if in a skeptical age some people knew that all the myths were real?

Note how none of those what ifs say “and all of humanity has totally lost their entire minds and the art of conversation is mostly just recapping facts about our days.”

See how they’re not there in the what if? That means we get to assume that humanity still has whatever part of its mind we ascribe to it today, and conversations still often have points and awkward non sequiturs.

“Surely,” you ask. “Surely that’s not as important as the fact that there are space battles (spattles?) and vampires (no portmanteau needed, unless they’re space vampires, in which case I submit they’d be spampires**) running about?”

I vant to suck your ozone!

So glad you asked, and great use of portmanteaus.

I heartily disagree. There are great works of fiction about the world entirely as it is now, devoid of battles or vamps, be they space or Earthican. The “what if” is the plot–the rest is the story. And the plot is usually something you can say in a sentence or ten (unless you’re GRRM and need a cork board, push pins and 10 skeins of yarn to create some sort of intricate plot web) but the story hopefully takes a bit more time than that. If not, you should try micro-fiction, I have a feeling you’d be great at it.

This is what makes or breaks a book for me. People should be people. Dialogue should sound like something you’d overhear on the train, or if you were a fly on a wall with sufficient sentience to understand speech. Sex shouldn’t be possible if you’ve been so badly hurt that day you lost consciousness twice. You know. The average day-to-day stuff.

The second real things stop happening around the “what if,” we’re taking a dive into fantasy, and the cheap knock-off cloth we used to imitate the design of the Great Creator will no longer suffice. We need to make whole cloth anywhere we deviate from reality, or serge the shit out of it with details and explanations.

I think my costuming metaphor, much like my attempts at ruching on a sewing machine, is getting away from me.

What I mean to say is that when natural progressions falter in realistic settings, the whole story falters. The light falls down in the middle of The Truman Show. The set piece collapses on stage. We see the boom mic in a wide shot, and suddenly we’re not watching the show anymore, we’re examining the facade of it. It all falls apart if we don’t believe the world is gonna support the story. This is how fairies get killed. 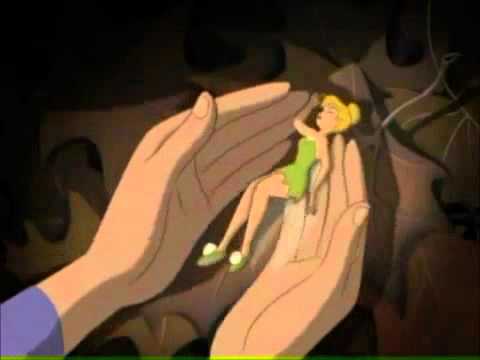 NNNOOOOOOOOOO! TINK! I BELIEVE IN YOU! *CLAPPING*

When I’m stuck writing about what would happen next, I think about what I would really do in this situation. What would [friend] do? And I see how I can work something close to that into my writing. I can tell when authors do that, or when they just think “what would be cool?” Cool is great. Being unable to continue fighting because a regular guy with no powers is so sexy that the breath is knocked from your chest is not cool. That’s not a thing. If it is, it’s probably the type of thing often treated by a psychiatrist and/or a great vibrator. I recommend trying both, and then maybe including your findings in your next book.

This attempt at realism is something done regularly in science fiction, because those stories are almost always really about the limits of humanity when put in extreme environments. My favorite urban fantasy is when we treat our characters similarly. If monsters and magic are real, the world just got a lot less hospitable, and it’s already pretty skewed towards our destruction as is. As always, people screw things up, and that’s the best part of the story.

*This is a total and also a complete lie. I am extremely picky about most-to-all things.
**Spampires might also be umpires made of canned meat, or empires built on unwanted emails.