There’s a certain tone of voice my mom uses when she is afraid that one of the rest of us in the family have punched someone. It’s a curious sound–a sort of cross between resignation and dread, a desire not to know but a duty to learn.

Me: [explains about some provocation]
Mom: *pause* Did you hit him, Allie?

Given that I’ve pretty much never laid hands on anyone, this is a peculiar response. Okay, there was that one time, but let me defend myself. With words, Mom, with words! He started it. I feel pretty justified in that one. But the rest of the time, I keep my sparring to the verbal sort, and my killing to the “with kindness” variety.

I mean, of course I want to smack some people, but I realize this is a society we’re trying to have and that hitting doesn’t generally achieve the desired goals of a society.

So what is this fear? Do I come across naturally violent? Do I have an evil twin who starts skirmishes and pulls chairs out from under innocent bottoms? Does my mother have a past of which I am not aware that has her wondering when my hereditary attack mode will kick in? Or maybe she’s just wondering if one day she’ll turn around and find all three of us are now martial artists ready to start static at circuses, film katas in the backyard all day, and learn complicated snap-dance choreography. No, hang on, I think that last part might be more of a her thing again! I’m not sure if dance fighting is more dance or more fighting. Perhaps I should investigate this as a potential family activity.

I guess her concern was more understandable yesterday, when I attended a counter-protest aimed at disrupting a “meeting” of Proud Boys and other neo-nazis congregating under the guise of rallying “for the people.” But I still didn’t hit anyone, and I really feel this should lay to rest any concerns about my self-control.

By now you’ve likely heard all the rhetoric around how to deal with white supremacists, white nationalists, nazis, neo-nazis and the rest of those advocating for my death and the death of people I care about. I have seen only two ways to make hatred at their level go away: to melt it into compassion, or to ostracize it completely. The first is difficult. It takes a lot of time, patience, and effort to find common ground, to disrupt worldviews and demonstrate that there is no other, or that the other is a benefit to the individual. This technique is powerful, but cannot be used en masse. There are therapists aimed at doing just this work, and their success rates are not considered terribly high.

The other way is to make them ashamed to show their snoot in public. It doesn’t stop them from being genocidal maniacs, but it does a good job convincing them they won’t get traction if they try. So, outnumbering them 10 to 1 accompanied by a nightmare of Gritties and an articulated Grumpy Cat, we made it clear that “the people” actually didn’t care for their rhetoric. 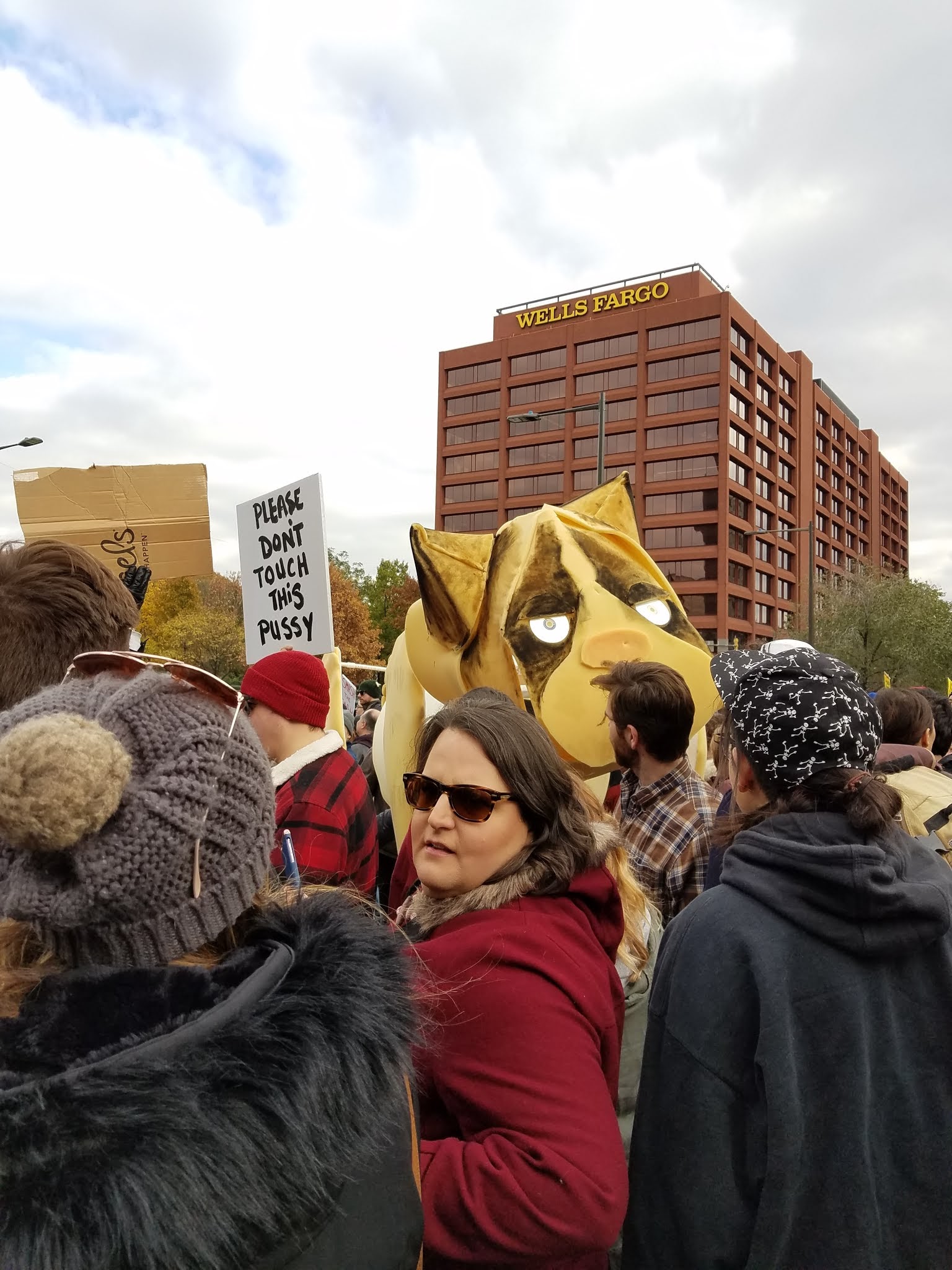 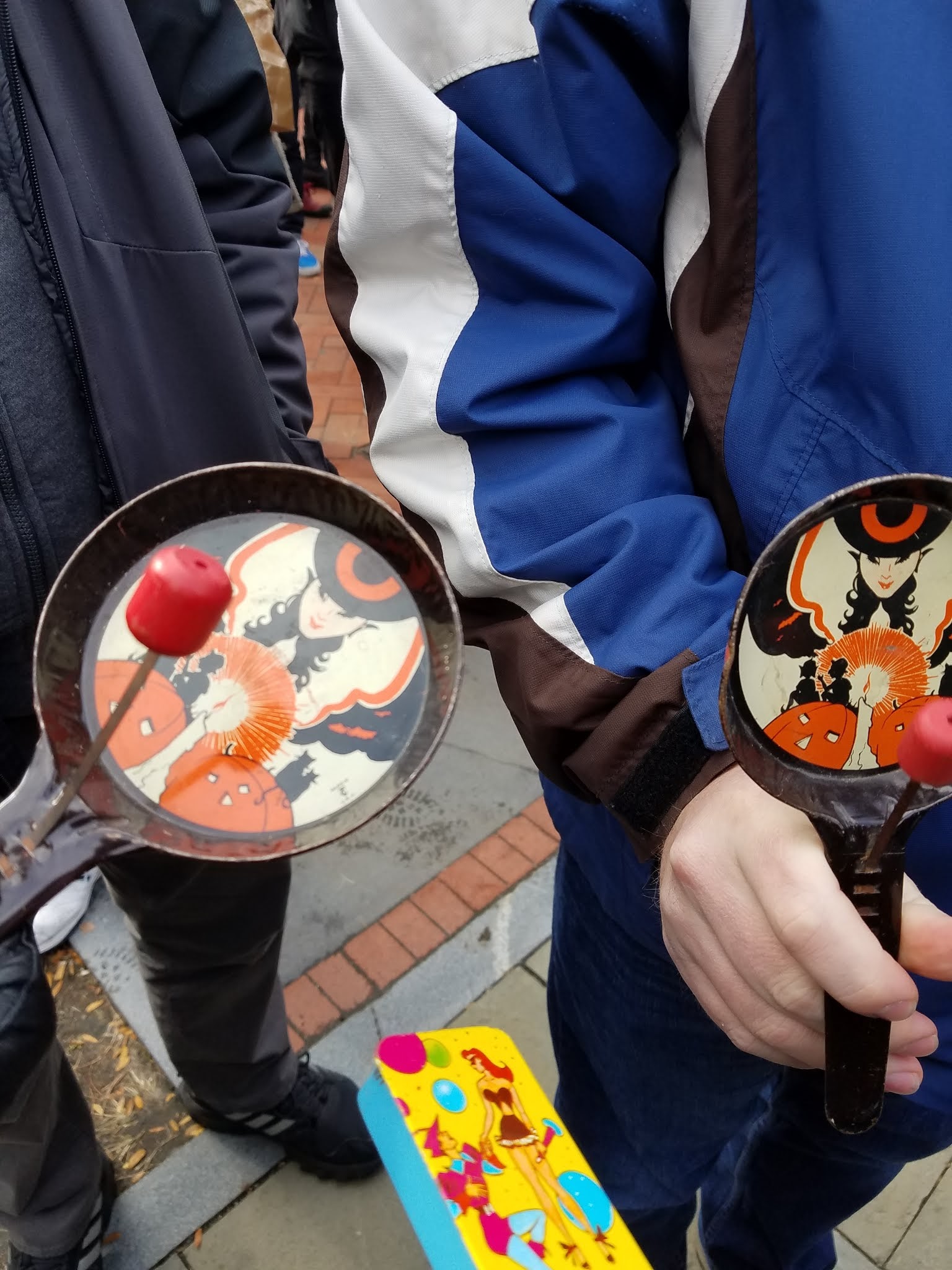 And we got loud about it. So, no, Mom, I didn’t hit anyone, I promise. I just stood next to the brass band playing raunchy pop songs for some anarchists, used every noisemaker I’ve ever had, and definitely did not employ my indoor voice. That’s better, right?

(Thanks to my parents, friends, and city for really making it clear who we support!)