A pink turkey tried to rip my finger off when I was a child. I was trying to be a good Samaritan, helping it get some food that was on the wrong side of the fence and it just

tried to cripple me.

I learned that day that poultry cannot be trusted. I found the true “other” and it was fowl.

Look at them all. Plotting. Image courtesy of ABC News

I think that’s when I really started enjoying Thanksgiving though. I ate turkey with a vengeance. I won’t say it was a dish best served cold, but it was almost as delicious on bread the next day as it was piping hot.

It’s been my favorite holiday for years. My now-spouse and I started officially dating and then got married the day after Thanksgiving. It’s my favorite meal, and not just because I believe in limb for a limb turkey justice. It’s the one meal where I can put bread on more bread and rather than judge me everyone thinks “this girl has it all figured out!”

Truly, it is a day of wonders.

There’s a glaring problem of course with Thanksgiving–the treatment of the native peoples in this country is appalling. In fact, even as I write this, the very Native Americans who saved the pilgrims in our creation story are fighting against their land being taken again.

There’s a lot of work to do there, and a lot of empathy we need to heal.

I don’t have a but for that. It weighs on me, like the various pagan rites usurped by other religions, like the massacres we cover up with drinking festivals and fireworks.

I do think that gratitude deserves a holiday. I do think that getting together to appreciate the people we love and the blessings in our life is worth pausing our schedules for.

I am thankful for a world striving for better, and the people who populate my particular world. I’m thankful for you. I hope you all have a moment to find a blessing, if not today then some day that speaks to you personally or culturally. In a world all about getting things and putting a price on them, getting together is priceless. 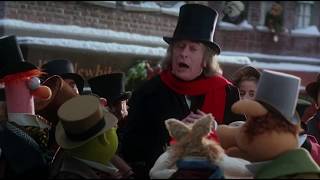 I will hold you close in a grateful heart. Image: Muppet Christmas Carol