I’ve been discussing lately what makes something mature. Is it the language? The content? The depth of comprehension? Some unfortunate combination thereof, that, like charisma, you’ll either possess or envy forever?

Hell if I know. Most days someone says something serious to me and I look around for an adult to come sort it out and then I realize this person is older and presumed wiser than I am and is asking me for my help, which means no one’s driving the bus.

Correct use of language doesn’t bother me. I think one of the hallmarks of my generation is that word use doesn’t bother us much, but words used at someone are a problem, as are words co-opted from other groups and misused. For example “son of a bitch” is a totally acceptable thing to say in surprise. But if that person said “you son of a bitch,” I may take it a little personally. Slurs are completely unacceptable. The “c-word” will get you thrown out of my house, I don’t care what context it’s used in. (Sigh. Except the books by GRRM, because apparently there wasn’t any other word he could think of, and I like dragons.)

And, while dropping helper verbs or articles is now a thing used in common parlance, it has grammar to it, believe it or not. You can say “I been done,” which is a phrase stressing how quickly something was finished, but “I been fished” makes no sense, unless you’re a trout upset about the hook in your mouth. “I done fished,” is, however, totally correct English.

Those are the things that get me. F-bombs are more like f-breezes, unless they’re aimed at me, and then we ’bout ta have have a talk.

So, if it’s not language, what makes a book for mature audiences? The sex? Girl…there’s been sex in the books I’ve read – even YA! – since I was eleven maybe? Probably earlier, but that feels safe. Sex is everywhere. Is it the violence? It better not be, because Looney Tunes is basically a riot of ultra-violence, and I watched that a lot as a kid. The gore? I hope not. I really don’t want to just read gore for the rest of my life.

I tend to think books more mature when they’re…well…not as fun. No dragons, no spaceships, lots of metaphors and the loss of something critical to the human experience. That sounds like a thing grownups might read. They like things like coffee and beer and onions, so maybe somehow they derive pleasure from the terrible things in the world, which is why they read the news, even now that websites don’t often have a section dedicated to crosswords, horoscopes and Charlie Brown. 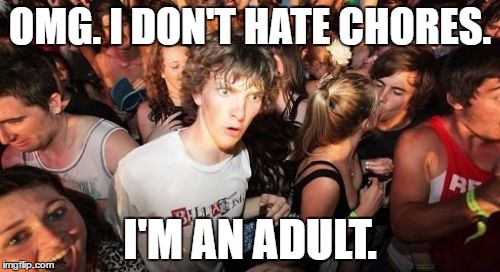 But I also think it can be in how less painful things are discussed. When the bad guy is actually just a guy who doesn’t understand how he impacts the world around him, when some things can’t be put right, even if you have all the right spell components. When we think about how zero gravity would impact human evolution and how the vastness of space would weigh on our psyche, those are not small, childish thoughts. We don’t think of children as mature when they curse at the TV, or when teenagers fool around, or toddlers punch each other. We consider them mature when they stop thinking just about themselves and how cool something would be. When they discover stillness and consideration. And therefore, I submit that possibly it’s the same for literature.