This post contains spoilers for The Last Jedi and Avengers: Endgame.

Please read on at your own risk.

No, seriously, not only do I talk about things that happened in these movies, I also will be sharing thoughts that might either make you see things slightly differently and then you’ll be sad like me, or you’ll think I’m an complete cad, and then be mad at me, and neither of those are something I am asking you to embark upon lightly. I’ll put some hold music here so you can mull over your decision.

Still with me? Okay. Awesome! Then let me further say, my goal here is not that you shouldn’t enjoy these movies. My goal, as someone who tells stories, and a feminist, is to consider what narratives we’re sharing, what that communicates, and perhaps allow us to reflect on how we might leverage this knowledge for new stories in the future. Please, like things and honor them, but let’s also recognize that as many steps as we’ve taken towards equality, we’re not there yet, and it’s something that can be seen from anywhere on the map.

Let’s do a recap of some key plot points in these franchises.

In The Last Jedi, Poe starts with some daring heroics, disobeying direct orders from his general but taking down an Imperial Dreadnought. During this time, a tracker device is placed upon the Rebel flagship which allows the Imperial army to track them through hyperspace. This then sees an attack on the fleet which kills off (or almost kills) all leadership, and we’re introduced to Vice Admiral Holdo, who makes it clear very quickly that she is not General Organa, and does not find Poe nearly as cute as he finds himself. She tells him to sit down, but that isn’t a command Poe knows. 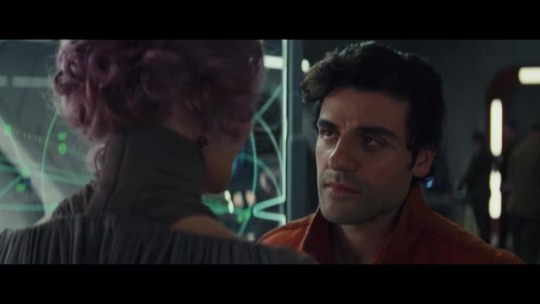 I do not sit. I will not roll over. I only bite.

So, when Finn and Rose come to Poe with a plan to turn off the tracker, he is comfortable not sharing that information with his admiral. The three conspirators set up a scheme to meet a master codebreaker on a capitalist paradise world, and instead of following the rules that allow them to keep a low profile, Finn and Rose are bustled away to jail because of a parking violation. 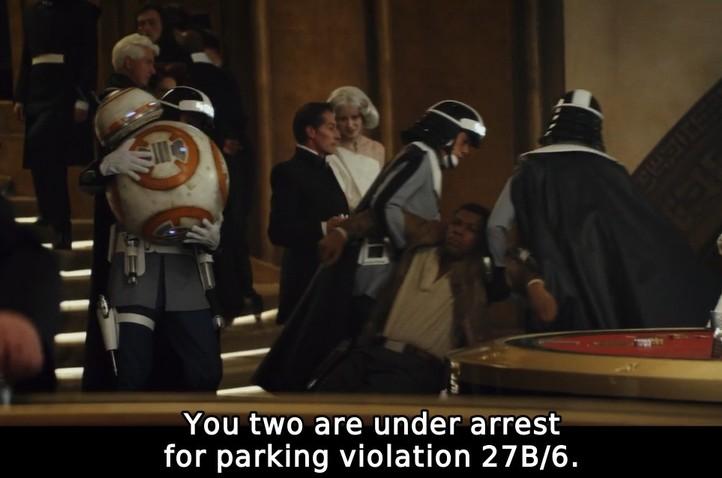 There, they just so happen to meet and trust a fellow prisoner who says he’s also a codebreaker who oozes untrustworthiness–who even says he shouldn’t be trusted. Be that as it may, he helps them turn off the tracker and helpfully gives a “both sides are the same” speech while the Vice Admiral makes tough decisions about casualties and reserve supplies.

Unable to stand it any longer, Poe demands a plan, and is told, again, that the grown ups are busy, so he may take any seat he’d like except the admiral’s. And, as I suppose his knees don’t bend, he mutinies instead. The mutiny is ended when Leia wakes up and shoots Poe in the face. Then both women, now condemned to picking someone to die for whoever’s still alive after Poe’s stunt, say how great a guy he is and then explain how they’ve had a plan all along that would get minimal people killed while they got to safety. And, despite Poe’s best efforts, he sees that “it could work,” and lo and behold, it does.

There are other things happening, important for the growth of the characters we’re following, but this is the central plot, the one that drags everyone else in. In short, Poe doesn’t want to listen to his General, and doesn’t like his Vice Admiral, a striking, soft spoken woman who doesn’t lovingly shake her head at him when he does his hero antics, so he works against both women as if he knows better at every turn.

In Avengers: Endgame, we have a bunch of traumatized heroes trying to figure out what to do now that Thanos seems to have won. They find the stones are gone and must undergo a time travel heist to unravel the problem. In a cutesy twist of fate, all of the original Avengers–Cap, Iron Man, Thor, Hawkeye, Hulk, Black Widow–have survived the snap, joined by Antman, Rocket, Nebula, War Machine, Captain Marvel, and kinda Pepper Potts/Rescue.

Each time-travel destination is meaningful to the characters there, with Black Widow and Hawkeye finally settling their debts to each other. Nebula realizes that her past-self can access the files of her current-self, and no one decides to do anything about that despite being warned. They then all reconvene at the Avengers Headquarters sans Natasha and prepare to deal with a woopsie that brought Thanos into their current timeline, which is hijacked by old-Nebula, who is then killed by current-Nebula in the fight to get the gauntlet to someone who can use it.

It’s decided that the Hulk is the strongest candidate, and he snaps everyone back, beginning a literal “passing of the gauntlet” through the heroes of subsequent MCU storylines until finally it ends with Tony who uses it and dies from the magical energies within, thereby sacrificing himself and killing the entire army that Thanos had brought with him.

You’ll notice that nowhere in there is there mention of Captain Marvel’s abilities even though we know that she’s alive and still fighting. We’re given a blow off as she explains she’s trying to keep the rest of the universe together, too, and then the Avengers merrily begin doing their own thing without her. There wasn’t a call out to her to say they were about to mess up some time streams so maybe to hang out around Earth, or a request that she use her dreadnought-destroying fist to snap back at Thanos, or even that she use her highly advanced alien soldier skills to become the new leader of the Avenger Reservists like Rhodey, Sam, Bucky, Scarlet Witch, and Okoye.

It seems to me both franchises have–I suppose inevitably–come to the point in their attempt at inclusion as most institutions run by men.

In real life, most men do not see themselves as “women haters.” They would not hit a woman. Likely the worst word they’d use about one is “bitch” even if they think something else. They love and respect their wives, mothers, sisters and/or daughters, and will, in surveys, explain that they have no problem with strong women and support women in positions of power.

At least in the abstract.

In real life, there is a strong correlation between women CEOs and companies performing poorly, which is often used to perpetuate the belief that, for whatever reason, there just aren’t as many women who are qualified to lead. But studies show that this isn’t about temperament or biological weaknesses or anything like that. Indeed, the larger reasons seem to be that most boards won’t support a woman in leadership until things are so dire that even the craziest of plans must be considered–crazy plans like women taking charge. And, even when they’ve conceded there’s no way around this, the only person who’s willing to pitch in wears skirts and won’t let you mention that to her, they’re more suspicious of her plans and less willing to help brainstorm or enact her vision. And so, the ship sinks, and the captain with it, except when the captain’s a woman, people remark how women are always bad luck on ships, it’s just a fact. Love us as a silent figurehead, condemn us as a captain.

These franchises have sold this story to us, too.

They don’t hate women. Women have been part of every Avengers and Star Wars movie, in different roles, on different sides, and each got at least a second in the spotlight. Women with awesome powers, women in command–generals, even! They’re so welcome on the team. They’re even welcome to lead meetings and award commendations or call out coordinates to their soldiers. But at the end of the day, no one thinks to listen to her if a mediocre man with confidence has a plan. No one thinks to call her until things have gone so far south that suicide is the best case scenario.

And in showing how these characters hobble the women around them, the writers are hobbling their franchises. With Cap, Iron Man, and Black Widow gone, with Captain Marvel the Johnny-come-lately flit they portrayed her as, and Holdo forced to forgive the man who sentenced her and hundreds of others to die, we lose faith in the next leaders of the Avengers Initiative and the Rebellion. What makes anyone think that Poe will defer to Rey? Why would anyone think to call Captain Marvel now, when she only shows up to punch a ship at the last second?

General Organa and Captain America were the leaders of their respective world’s heroes. They left without showing us for sure who the successor would be, except for hothead Poe, who’s done more to kill the Rebels than anyone since Anakin wiped out Alderaan, and…who, of the Avengers? Sam because he carries the shield? Captain Marvel, who is so forgotten she doesn’t even warrant a call til the fighting starts?

Both the characters and writing have made it incredibly hard for it to be possible for a woman or a person of color to take command without attaching failures that can be felt across the whole group, not just the individual. It seems that, in writing these worlds, the writers forgot that the most overpowered super power of all is privilege, and without its protection, no one can be expected to prevail against the insidious evil of bigotry.

I’d like to challenge writers to consider a world where everyone acts like Nick Fury in Captain Marvel. He’s a strong, competent man whose leadership qualities buy him loyalty even unto death. His ability to recognize the skills of everyone around him, step up when something needs to be done and sit down when he sees he’d just be in the way assures that his team trusts him and his plans, even when he’s making it up as he goes. That’s respect. That’s allyship. That’s leadership. What the writers for Captain Marvel saw is that equality isn’t everyone running around with commander stripes–it’s believing that everyone has a real strength that is respected. It’s telling stories that don’t hinge on our ability to go along with the fallacy that women aren’t equipped to lead, and gives leaders who can command trust rather than simple fondness.